The Haltech 2012 World Cup Finals in Valdosta, Georgia was a huge event with a record turnout of over 800 motorcycles competing for their share of $67,000 over the three-day event from November 9th-11th.

Team HTP Riders Danny Cox, Lavar ‘Lil Charlie’ Delee, Willie Nichols and Ryan Schnitz were well-rested after an 8 week vacation from the track. All bikes were prepped and ready for action thanks to the tuning and expertise of Crew Chief and HTP Performance Owner, Cecil Towner III.

“We’re really looking forward to collecting more data and improving our performance with the help of Motec and their track support this weekend” says Cecil. “We’re using Motec ECU’s on all of these bikes, and most bike builds we do, and we’re always looking for improvements. Drake DeVore (Motec Systems East Chief Engineer) is here along with James, Jacob and Hannah to provide full support to us and our customers.” Ryan adds “When Motec is here, the others will fear! It’s always great to have their full support and experience at the track.”

Friday Night Pro Comp qualifying put Ryan in the #1 Spot with a 4.095 @ 172.30mph, the quickest pass for a Fuel Injected Hayabusa Powered Pro Mod in the world. Towner claims much of the improvement to a brand new prototype throttle body from Lectron. “Kevin Gilham from Lectron Fuel Systems contacted us about testing a new throttle body. We’re always looking for something new to try so here it is. So far, we like what we see!” 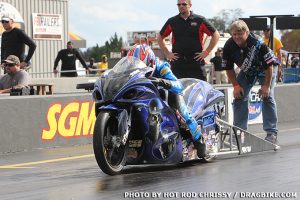 “Lectron is famous for their carburetors in not only motorcycle drag racing, but snowmobiles, side by sides, quads and dirt bikes,” says Kevin Gilham, owner of Lectron Fuel Systems. “We’ve been working on throttle body designs for some time and wanted to get a baseline on some of these features with a reputable team to gather some data and help to refine the end product.”

After two more rounds of qualifying on Saturday, Schnitz could not improve on his 4.095 pass and finished qualifying with the #3 Spot behind veteran racer Paul Gast’s 4.089 and the Turbo Charged Kawasaki of Mark Paquette’s 4.080.

HTP came loaded with three Pro Street motorcycles. Danny and Ryan both came to compete on their familiar nitrous combinations. Lil’ Charlie brought out an only 7-passes old Turbo Hayabusa that had recently added 75 pounds of ballast to meet the minimum weight for the class. “Silly me for building a Pro Street turbo bike like I do a grudge bike,” snickered Towner. “I mean, everyone says how heavy their turbo bikes are and I just built one like I always do for my customers and I’m nearly 100 pounds lighter than most of the competition.” 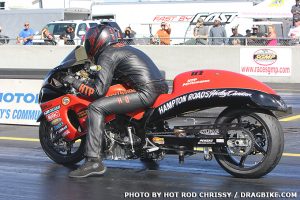 Saturday night was where the fun really began for the team’s Sportsman Racer, Willie Nichols. His 2008 Hayabusa Pro ET Bike with a Plug and Play Motec M84 ECU was on fire! “It’s like I’m cheating with this bike and the Motec on here,” says Willie jokingly. “I’ve got this Hays Clutch so I can just drop the clutch and the Motec does the rest for me. All I have to do is cut a light on the bottom bulb like a real racer because I don’t need a sissy delay box.”

His soft-leaving, nitrous-huffing Hayabusa was running dead on his 8.31 dial in throughout the night as he cut his way through nearly 100 other racers to make it to the finals. After a very late night and early Sunday morning, an out of routine mistake caused Willie to red light giving the win to Kevin Adams. “I was busy between rounds helping guys load their bikes up in trailers and I made a mistake. I’ll take home the trophy next time,” states Willie. “I really wanted that win”

Winning was definitely what HTP wanted on Sunday as Pro Comp and Pro Street were heading to the lanes. Chief Mechanic/Sous Chef ‘Big Cec’ Towner, along with Mechanic/Motor home Chauffeur Al ‘Bud’ Newberry, had the bikes prepped and riders’ bellies full and ready for battle.

E1 of Pro Comp was a less than spectacular 4.193 @ 170mph after a tire change from Saturday’s tire chunking qualifying sessions, but was enough for a win. Danny Cox in Pro Street had a great and consistent pass of 7.183 but his soft .113 reaction time caused his exit from eliminations. “I had a great bike and was looking forward to going rounds today,” commented Danny. “I just had a bad light. That’s racing.” Ryan was able to hold off Mike Bayes’s killer .003 light with his 7.111 @ 201.85 and .026 reaction time. “I saw Mike get a jump on me but we were able to get by him in 2nd gear and hold him off,” says Schnitz. “We’re getting there, round by round.” 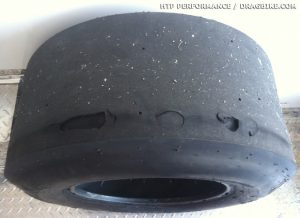 E2 was also good for Ryan and HTP beating his former Dash for Cash Junior Dragbike co-racer Brunson Grothus. “We use to race each other at Muncie Dragway back in 1994 when we both were kids,” remembers Schnitz. “He’s a great bracket racer and deadly on the tree, just like he was nearly 20 years ago. Now I have to deal with him again in Pro Comp.”

A solid 7.070 beat George Gooch’s 7.612, but didn’t give him lane choice over Frankie Stotz for the semi-finals. After a 5 minute track clean up, Ryan and Frankie were at the line ready to battle. Both nailed the tree with a .016 and .017 light and by third gear Ryan had pulled 2 bikes on the Honda and crossed the line with a 7.027 @ 202.45mph and the win. “Wow, I knew that was going to be a rough one and it was. Frankie was on the tree but Ryan did his job too. I’m just happy we could hold them off,” said Cecil. 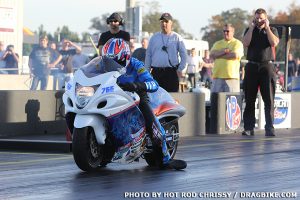 With the temperature dropping, many fans began to wonder if the first side by side 6-second pass was going to happen in the final. Rodney Williford had just ran a 6.968 and Schnitz was getting quicker throughout the day. As fate would have it, a 30-second delay at the starting line due to some dripping of oil and confusion on the starter’s part allowed the tires to cool and lose grip for both bikes. Schnitz was able to recover slightly better and crossed the finish line first with an 8.049. “I’ll take it!” says Towner. “A win is a win is a win and that’s fine with me. Ryan rode his ass off this weekend running two pro classes back to back and staying focused.”

HTP was happy to wrap up the season with a win and now set their sights on their 2013 program.

They would like to send special thanks for the continued support from their 2012 Sponsors: