The HTP Performance Nitrous Hayabusa claims the first EVER Pro Street Motorcycle to run in the 6-second zone. The team has rocked the series since their arrival in 2010, breaking records and winning races, but their most recent achievement is one for the history books.

The team headed to Budds Creek, Maryland early the week of the MIROCK Fall Nationals, eager to test after a number of alterations to their clutch and chassis setup. The weeks before had presented many hurdles for the team as inclement weather and natural disasters repeatedly caused them to reschedule their test dates. Thankfully, the Thursday before the race, weather was great and track conditions were perfect.

One major change made was to the Hays Convertible Clutch. Tim Hays of Hays Machine Works offered track support and a small adjustment that made a major difference in their setup. Rider Ryan Schnitz stated, “We could see and feel the difference. I was excited because we made a change and could see the change. 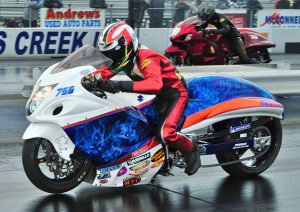 Many times when you make changes to things and don’t see a result, you’re stuck not knowing what direction to take.”

After a successful test session, putting down back-to-back 7.0 passes, they parked the bike with a sneaking suspicion that if the weather and track were as good as they were during testing, a 6-second pass was very possible.

Weekend weather threatened racers with wind, rain, and a 20-degree temperature drop. A drastic change in conditions with an unknown effect on the weekend’s racing. “Everything was stacked against us every pass. Between the drizzles that kept coming and going, and Pro Mods breaking and leaking gas and not making it down the track in the lane we were in, it was making me nervous,” said Towner.

Racing continued, and the track seemed to be holding. Schnitz spoke of the increasing stress. “The pressure was intense. I knew I had to make a clean pass and be on my game. Cecil and the entire crew didn’t put any pressure on me at all, but I did on myself.” 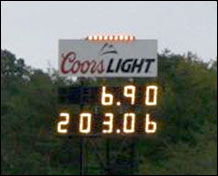 It was during Sunday’s first-round eliminations that Schnitz rode the World’s Quickest, with a 6.907s pass at 203.06mph. “As soon as the bike launched and I shifted into second I started to feel it tote the front wheel just enough to stay planted.  Shifted to 3rd and 4th and the bike made a move towards the center.  I kept my focus on the finish line and started to bring the bike back to the groove.  Shifted to 5th, then 6th and just tucked in and tried to keep it straight.”

It was in 2009 that Keith Thompson, on HTP’s Real Street GSXR1000, accomplished a somewhat similar feat. “It was awesome when we built the first Real Street bike to go in the7-second zone, and it’s always been a goal from day one to be the first Pro Street bike in the 6’s.”

In addition to the title of the “First Streetbike in the 6’s”, Hays Machine Works offered a $10,000 bounty to the first bike to claim this title using their Pro Street Convertible Clutch. “It’s great to see companies who give back to the race community,” says Towner.

So what’s next for the HTP Crew? “After seeing what we were able to accomplish with the Pro Street bike, it’s really inspired me to focus on finishing our Pro Mod. I want to prove the technology and engine building that we do at HTP is competitive with the top teams out there.”

Will Schnitz be on-board for this new venture? The Schnitz-Towner relationship appears to be one that’s long and lasting. “Cecil has been phenomenal to work with and ride for.  Always doing whatever it takes to make the bike as safe as possible for the rider and being honest and open. I know every time I get on the bike that it is 100% ready to go.  He has always made a smart and thought-out decision on every tune up or setup change.  His equipment is state of the art.  At every event or test session there has been a major upgrade or change to improve performance.  He is truly dedicated. I am extremely grateful to be a small part of this extraordinary achievement and look forward to a long business and personal relationship with Cecil, Leah, Kylie and their entire family.”

And that’s exactly what Cecil Towner considers his crew and sponsors – Family. Thanking the many who have supported his program over the years.