Ryan Schnitz had a killer weekend making the event sponsor proud at the Prostar Schnitz Memphis Blues Nationals at Memphis Motorsports Park. Ryan continued his dominance of the Lee’s Performance 1000 SuperSport class, qualifying number one, winning the event and almost more importantly, becoming the first 1000 rider to crack into the 8’s with a scintillating 8.900 on the Muzzy Kawasaki ZX-10R. All those magazine test riders are in envy! Ryan took the final with a 8.99 over former 600 SuperSport rider Norman Jackson.

Ryan then hopped on the 600 SuperSport ZX6R vacated by Chip Ellis and showed the form that brought him two Zero Gravity 600 SuperSport championships, qualifying on the pole and taking the win. Not rusty at all! Ryan pulled the low e.t. of the meet at 9.762 in the final against Chad Millholland. Father Dave was so pleased he even let Shana present in the winner’s circle 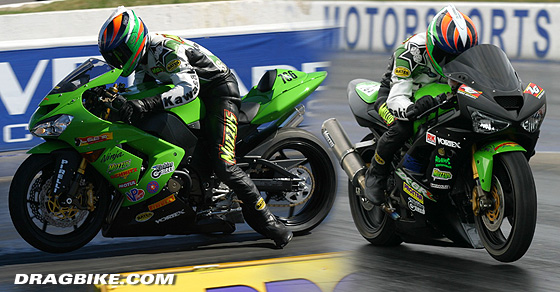