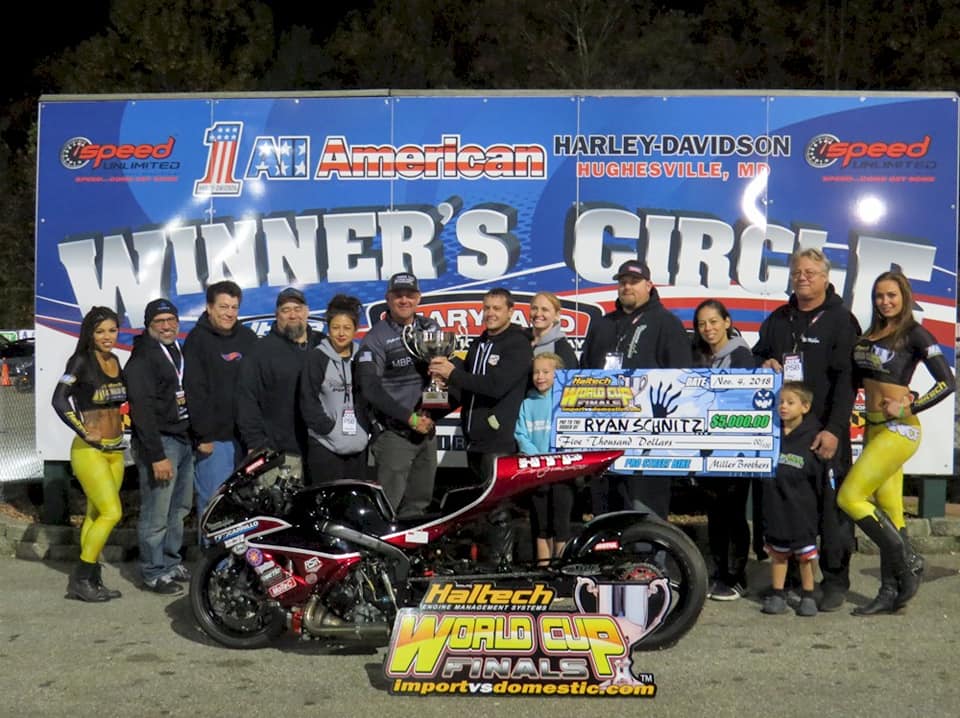 Lines formed early in the week as competitors and spectators from across the globe settled in for the five-day event. Forecasts of inclement weather and dramatically changing temperatures and density altitude (DA) numbers greatly affected racing for the weekend. Head of track prep, Jason Miller, had the daunting task of adjusting the track prep for multiple tire combinations for the wide variety of racing classes. HTP Crew Chief Cecil Towner commented on the track conditions.

“We can’t compliment the staff enough with their hard work to keep the track prepped and the event running smoothly. I admit I missed the tune for our first qualifying pass.”
They spun, running 9.54s.

Friday morning conditions fared much better. DA numbers were reading extremely low and Miller made some adjustments in his prep for the motorcycles. In Q2, HTP had a solid run to the 1/8 mile. The bike drifted towards the center line and Schnitz was forced to roll out and abort the run early, putting up 6.82s in the quarter-mile. Towner was feeling good after the pass.

“We knew that if we could keep the bike straight on the racetrack, conditions were set for making a solid run for Q3.”

In HTP’s third qualifying pass, they shocked the world with a 6.62s pass at 217mph, making it the quickest liter streetbike recorded.

“Honestly, I was just relieved to have some of the pressure off knowing we were solidly placed in the field. Entering the event we had concerns for even qualifying being the only 1000 in a highly competitive busa-dominated class.”

After their impressive numbers in Q3, they were feeling confident entering Q4 until 30 minutes prior to qualifying Towner fired up the engine to do some routine checks. Towner noticed some questionable sounds coming from the engine. He decided to do an engine swap and assumed he would miss the next qualifying round. Due to some unexpected event delays, HTP was able to complete the swap just in time to make it into the lanes as the last set of Pro Street Bikes for Q4.

Still sitting comfortably as number one qualifier and having broken in their fresh motor in Q4, the team waived the right to make a pass in Q5 and decided to save their passes for Sunday’s eliminations. The competition was steep and each round would be a challenge.

First round Schnitz faced Pro Street veteran Jason Dunigan. Schnitz spun on the back half but was still able to beat out Dunigan with a 6.74s and advance to the next round.

In second-round eliminations the team faced Rodney Williford, current record-holder for the quickest and fastest Pro Street Bike in history. With the pressure on, Schnitz would defeat Williford and run the class’s quickest pass of the day, 6.65s at 213mph.

In the Final Round, Schnitz would face Justin Shakir and his Turbo Hayabusa who had been consistently fast in testing and qualifying all weekend.

HTP and Schnitz took the win over Justin Shakir to be named the first ever Pro Street Bike Winner at the World Cup Finals – Imports vs. Domestics.

Ranked just 7th in points in the 2018 XDA Season, many may not have expected the numbers the team was able to pull off over the weekend.

“We couldn’t have asked for a better way to cap off a great season for the hard work and effort put into the new project. We went into the season with a brand-new motorcycle in uncharted waters. It felt good to achieve a good ET, fast mph, and win an event. Couldn’t be happier with the overall performance of the new GSXR1000. None of this would be possible without all who were involved.”